Are you making avoidable mistakes in your portfolio because of some behavior bias? If you answered no to this question, you might be suffering from having an overconfidence bias which will ultimately lead to making mistakes.

Much of today’s academia concentrates on traditional finance. Traditional finance ignores how individuals actually behave and instead focuses on how individuals should behave. It assumes individuals act as “Rational Economic Men” which isn’t realistic. Market participants are human beings who exhibit feelings (mainly fear and greed) that can lead to cognitive and emotional biases which subsequently can cause mistakes. Every single person, including a professional investor, is susceptible to these biases and understanding them can help identify when they are happening. In this series of blogs, we will go through some common investor mistakes and address which biases are being exhibited in each.

The first common mistake many investors fall victim to is emotionally trading to “time the market”.  This mistake is twofold.  First, in many cases, people sell in anticipation of the market dropping but it does the opposite and continues to go up. A quote from one of the most successful and well-known investors of all time sums this mistake up best:

The chart below from the blog “The BIG Picture” shows you just some of the reasons why it was “smart” to sell and go to cash since March of 2009. 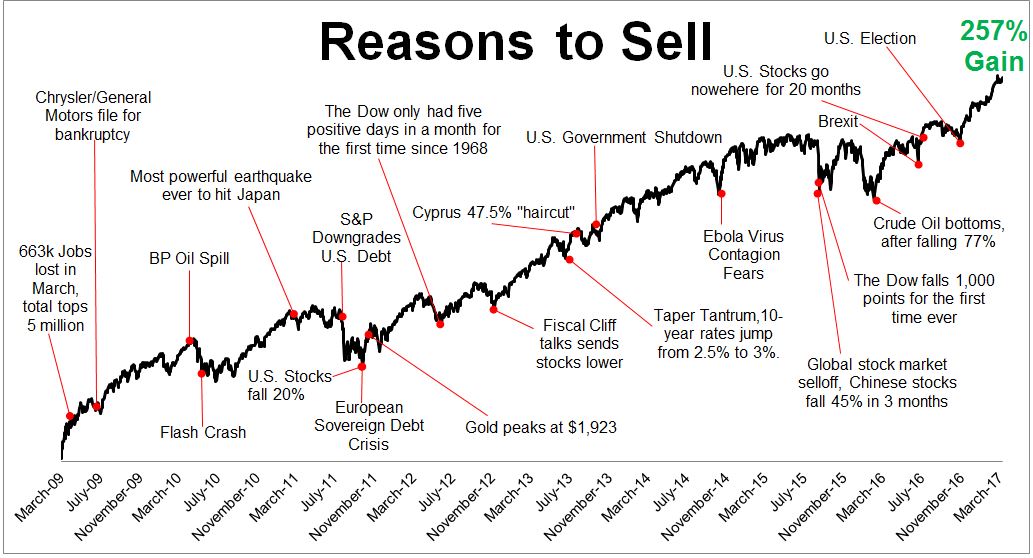 The second and maybe worse market timing scenario is when investors emotionally panic and sell their entire portfolio after the market starts going down out of fear that it will continue to go down. Even if they can correctly predict that the market will go down further after initially going to cash, the odds that they are able to correctly time getting back into the market are extremely low.

If you find yourself shaking your head in disagreement, keep reading. The graph below from J.P. Morgan’s Guide to Retirement illustrates the impact of missing the best 10 days between January 2, 2001, and December 31, 2020.  Your annualized return falls from 7.47% to just 3.35%; quite staggering considering it is only 10 days over the course of 20 years. If you happen to miss the 20 best days, your return drops to an annualized 0.69%. 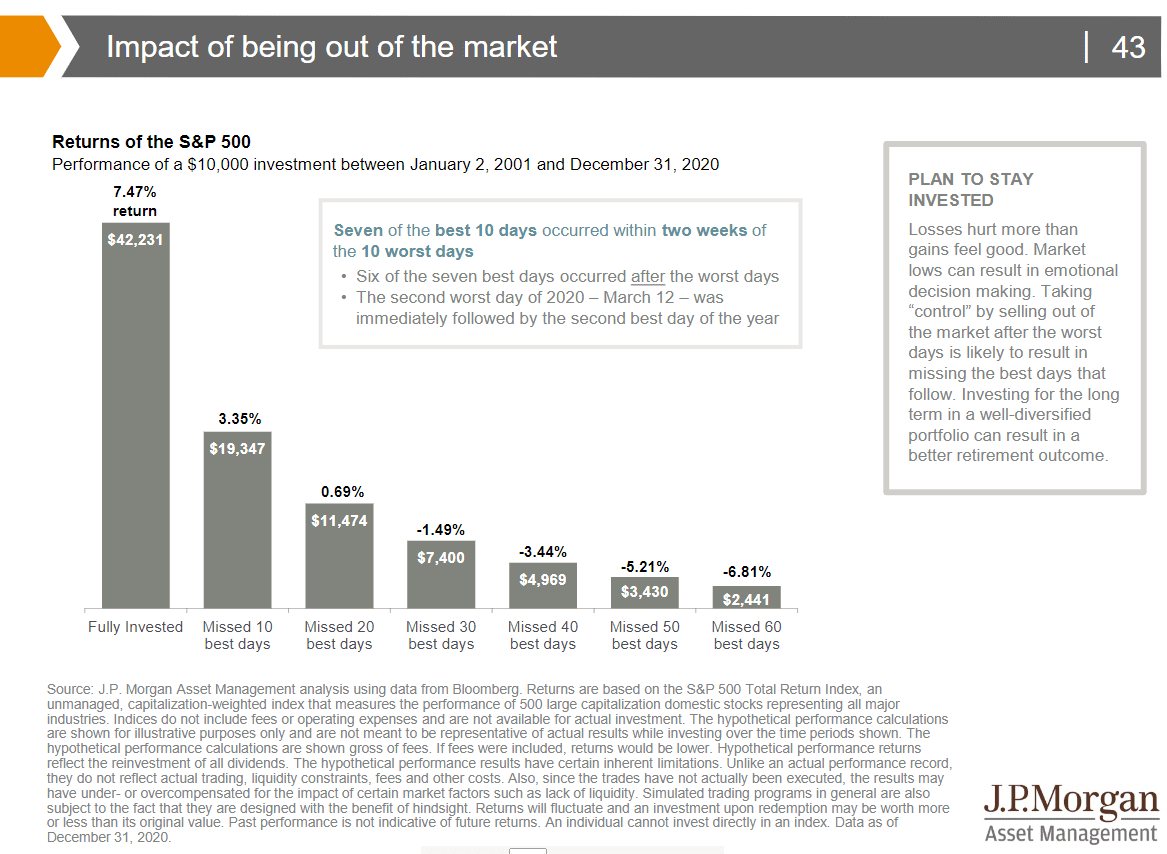 The magnitude of the results is interesting in itself but what makes it even more fascinating is when those 10 best days occur. Below is a second chart from the same J.P. Morgan presentation which shows the same results from missing the 10 best days above except it’s displayed in a line graph. Notice the vertical grey bars which represent those 10 best days over that time-period.  Every single one of those grey bars occurs during the most volatile and largest declines in the market, which goes to show that correctly timing the market is a losing proposition over the long run. It is difficult to realize these biases in real time but there are a few steps you can take to try and combat these. 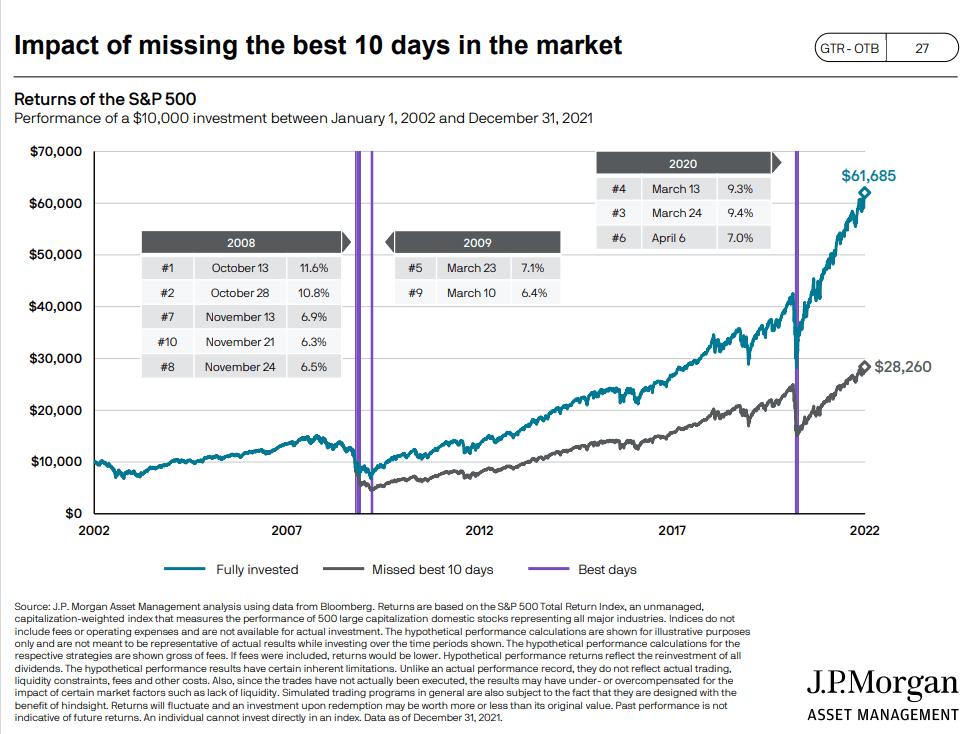 So, what kind of biases are causing this common mistake and what can you do to help combat them?

How to combat them:

The belief that investors can time the market is a common mistake and one that many people reading this have probably thought about themselves. Hopefully now it is obvious that it’s nearly impossible to consistently time the market and with the basic knowledge about the biases being displayed along with how to combat them, you can catch yourself and avoid making this mistake too. At THOR we have a disciplined approach that we persistently stick to, which helps us when deciding on portfolio changes and making trades in accounts. If you enjoyed this blog, be on the lookout for the next one in this series which will address the common mistake investors make by mismatching personal risk tolerance with portfolio construction.

Stay up to date with THOR

As a member of the Investment Committee, he performs investment research on both equity and fixed income products to help construct diversified portfolios for clients. Jimmy also meets with and assists clients with financial and retirement planning needs, estate planning, and tax planning issues.

3 Financial To-Do's When Having Children

What Will Cause Inflation To Remain High? Commodities & Wages